The economy of North Korea is a centrally planned economy where the role of market allocation schemes is limited. Attorney Michael Hay opened the first and only foreign law firm in North Korea. 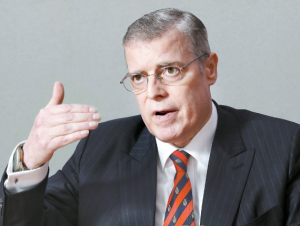 Michael Hay was a British-French lawyer who was best known for his legal work within North Korea, where he opened the first, and to date only, foreign law firm in North Korea. Hay was voted one of Asia’s Leading Lawyers three years consecutively by the readers of a legal publication.