You are here: Home1 / News2 / Geosciences

An oil spill is the release of a liquid petroleum hydrocarbon into the environment, especially the marine ecosystem, due to human activity, and is a form of pollution. The term is usually given to marine oil spills, where oil is released into the ocean or coastal waters, but spills may also occur on land.

For over one month now, an unprecedented extensive area along the shoreline of Brazil’s Northeast Region has been hit by an oily substance in the form of lumps of black tar, which origin remains unknown. 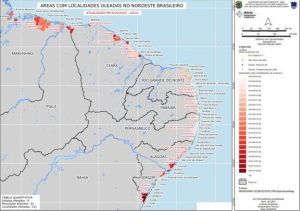 A study by the Institute of Geosciences of the UFBA, in partnership with the UFS, points out that the oil is of Venezuelan origin.

Official investigations Brazilian Navy’s DPC has opened an administrative enquiry to determine the source of the oil spill. The procedure includes analysis of maritime traffic data, information collected by naval ships and aircrafts passing or patrolling the area.

Navy’s CISMAR is investigating maritime traffic in the region, comprising an area of about 36,000 square nautical miles in Brazil’s exclusive economic zone, with an emphasis on oil tankers. In just one month, CISMAR identified 140 tankers, some of which are being notified by the maritime authority to provide information.

In accordance with the International Convention on Civil Liability for Oil Pollution Damage and the International Convention on Oil Pollution Preparedness, Response and Cooperation, both signed by Brazil, the fines for oil pollution can reach R$ 50 million, without prejudice to other administrative and criminal sanctions and the polluter’s strict responsibility to fully repair environmental damage.