The world’s richest man Elon Musk ($315.2B Net Worth), declared earlier this week that he would sell his stock in Tesla “right now” and donate the proceeds if a World Food Programme official could describe exactly how $6 billion could solve world hunger.

Elon, the current Chief Executive Officer at Tesla and SpaceX, published a tweet on Sunday that he would accept a proposal from David Beasley who stated that a $6B donation would be effective in the fight against world hunger. 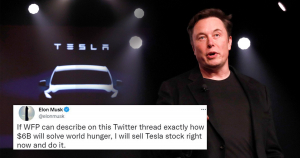 In a follow-up tweet, Elon added that David’s plan must include “open source accounting, so the public can see exactly how the money would be spent.”

David is Executive Director at the United Nations World Food Programme. The WFP is the world’s largest humanitarian organisation, the largest one focused on hunger and food security, and the largest provider of school meals.

Media representatives from Tesla are yet to comment on the exchange.

If Elon makes the $6B donation, it would be the largest known charitable contribution that he has made to date. Musk faced criticism in 2020 over not giving away more of his massive fortune, though Elon said he likes to remain anonymous when making donations.

At the young age of 27, John Collison has become the world’s youngest self-made billionaire. It has been rumoured to be lonely at the top, but luckily John has his 29-year-old brother, Patrick. The two brothers from a small village in rural Ireland founded Stripe.

Stripe handles online payments as well as providing a host of other services that help make it simple for firms to run their websites.

Many people may not have heard of online payment facilitator Stripe, but the brand counts Elon Musk and Peter Thiel as key investors. A funding round valued Stripe at over $9bn, meaning the Collison brothers each have a stake worth at least $1.1bn.

Despite this huge success, a recent interview suggests John remains down to earth.

Asked about achieving billionaire status at a young age, John said “People now ask this a lot and I feel like they always want some really interesting answer – and I have nothing for them.”

Wealth is not new to the entrepreneurial pair. The brothers made millions before they even reached university, thanks to another start-up they founded.

John went to Harvard University and Patrick attended the equally prestigious MIT, but both dropped out in 2011, to focus on building Stripe.

”I remember saying to Patrick ‘how hard can it be? Maybe we should give it a try.” John commented.

There are numerous start-ups aiming to help companies process online payments, but Stripe has managed to grow rapidly, priding itself on keeping things simple.