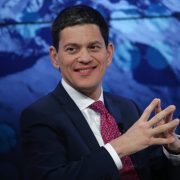 Great Britain has been left embarrassed on the world stage and there is international “bafflement” over Brexit, former foreign secretary David Miliband said.

The UK was viewed from abroad as being at a “low ebb” and “in retreat”, the former Labour cabinet minister said.

Mr. Miliband, chief executive of the International Rescue Committee aid organisation based in New York, said Labour should press for the option of continued membership of the EU to remain on the table when Parliament votes on the Brexit deal.

And he criticised Theresa May’s approach to triggering Article 50, starting the two-year countdown to Brexit, without knowing the outcome.

In an interview in the December issue of British GQ, on sale on Thursday, Mr. Miliband said: “I take no pleasure in Britain’s embarrassment.

“Those of us who are outside the country take absolutely no pleasure in the low ebb to which Britain has sunk.

“Brits abroad look at the fact other countries see us in retreat, having lost our way.”

The former foreign secretary said: “I was in office when Article 50 came into the Lisbon Treaty and no-one in their right mind thought a country would be crazy enough to pull the pin on the grenade unless they were absolutely sure about how the two-year ticking time bomb was going to go.

“You’ve got to be deeply worried about the prospects, for the country, of the negotiation, because we stand to lose much more than Europe does.”

He said Labour should argue that Parliament – or even the people, in a second referendum – should be given the choice between the Brexit deal negotiated by Mrs. May’s Government and continued membership of the EU.

Ministers have said they intend to give Parliament a vote – but that would decide between accepting the terms on offer or leaving the EU without a deal.

Mr. Miliband said: “Labour should argue that the British parliament or people must be given a choice between the Brexit deal negotiated and membership of the EU.