You are here: Home1 / News2 / Birmingham

Professional services are occupations in the service sector requiring special training in the arts or sciences. Some professional services, such as architects, accountants, engineers, doctors, lawyers, and teachers, require the practitioner to hold professional degrees or licenses and possess specific skills.

Over the past three financial years, Pinsent Masons Vario has achieved average year-on-year growth in excess of 30% and has opened in four new jurisdictions. In addition to this, it has grown its global client base to 250 clients in the past year.

Pinsent Masons was born out of a merger between Birmingham firm Pinsent & Co and Leeds firm Simpson Curtis in 1995. A London presence came in 2001 via a merger with City boutique Biddle with the rescue of the Midlands part of collapsing firm Garretts a year later.

The final piece of the jigsaw came in 2004, when Pinsents merged with Masons – a firm with a stellar reputation in the fields of construction, engineering, projects, energy and tech, with offices in London, Bristol, Leeds, Manchester, Glasgow and Edinburgh.

The early years were not entirely carefree: there were problems integrating the two legacy Manchester offices, a stream of partner departures included insurance dispute practice head James Crabtree and Bristol commercial property group head Rosemary Pike, and staff satisfaction was not all it could be; however, partner profits rocketed an unheard-of 70 per cent, from £234,000 to £400,000, in 2005/06.

2017 Birmingham Young Professional of the Year finalist Charles Jones has been appointed Associate Director within Lambert Smith Hampton’s Birmingham team. BYPY is an annual award ceremony, which recognises the stars of the city’s professional services.

Birmingham is a major city in England’s West Midlands region, with multiple Industrial Revolution-era landmarks that speak to its 18th-century history as a manufacturing powerhouse. It’s also home to a network of canals, many of which radiate from Sherborne Wharf and are now lined with trendy cafes and bars. In the city centre, the Birmingham Museum and Art Gallery is known for pre-Raphaelite masterpieces.

Lambert Smith Hampton is one of the United Kingdom and Ireland’s leading, and most progressive, property consultancies with over 40 offices and 1700 staff.

Lambert Smith Hampton help owners, investors and occupiers achieve their business goals with a suite of integrated services including sourcing, planning, funding, advising, managing, valuing and selling properties, across both the public and private sectors.

Lambert Smith Hampton are passionate about the work we do within the built environment, ensuring communities remain connected, while relentlessly challenging the status quo. After all, it’s their lifeblood to find new ways to solve the biggest property challenges of their time.

Finance professional Laura Thursfield has been named Birmingham Young Professional of the Year (BYPY) 2018. As illustrious guests from around the second city attended BPS Birmingham Future’s awards ceremony at The International Convention Centre.

BYPY is an annual event that recognises the finest talent across six award categories, with one category winner taking the title of overall winner. In addition to national exposure, the winner receives an Executive MBA from Aston University.

Winning a category at BYPY positions you as an exemplary figure and role model within the West Midlands business community. 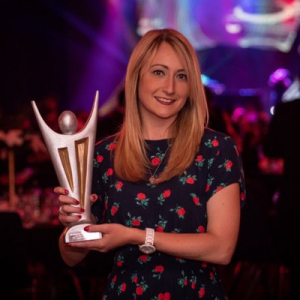 Laura Thursfield is an Independent Financial Adviser at Mazars LLP. Laura is responsible for leading the Birmingham Financial Planning team and for a wide range of Midlands-based clients. She has experience advising a wide range of private clients, from senior partners, directors and business owners through to independently wealthy individuals. In recognition of this, Laura was named Rising Star in the Women In Financial Advice Awards 2018.

As Birmingham Young Professional of the Year 2018, Laura acted as a national ambassador for Birmingham and is committed to improving the financial literacy of the city, in particular working alongside schools to develop key skills and self-development opportunities.

Alongside studying her Executive MBA at Aston Business School, Laura is a Trustee of CORE Education Trust and a member of the BPS Engage Committee, all contributing towards the goal of creating a supportive environment in which all who live and work in the region can thrive.