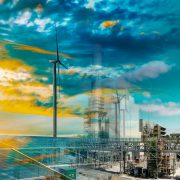 The energy industry of old just doesn’t cut it anymore, and time is running out to switch to cleaner and smarter ways of providing power before it’s too late. As the Intergovernmental Panel on Climate Change warned in its report released in early October, based on current emissions levels the world will reach 1.5 degrees Celsius degrees of warming, compared to pre-industrial, temperatures, by 2030.

So what can be done? At WIRED Smarter some of the smartest minds in the energy world came together to explore what the future of the energy industry might look like. Here’s the best of what we learned from a packed speaker line-up that included Bulb CEO Hayden Wood, Verv COO Maria McKavanagh and DeepMind’s Sims Witherspoon.

1. Little pushes can add up to big changes in customer behaviour

“What we find is that by having a relationship with customers we can change their behaviour,” says Hayden Wood, CEO of clean energy supplier Bulb. His customers who received annual energy reports ended up reducing their energy usage by two per cent, compared to those who didn’t receive the reports.

That might not sound like much, but it is estimated that if everyone in the UK made the same change that’d save customers £560 million a year, and stop 36m tonnes of CO2 being released into the atmosphere, Wood says.

2. Cutting down CO2 emissions isn’t enough – we have to remove them too

“We will need to reduce CO2 in the atmosphere,” if we’re to stop the most extreme impacts of climate change says Jan Wurzbacher, founder and director of Climeworks, a start-up that builds infrastructure to capture carbon from the atmosphere and lock it deep underground.

Last year in Zurich, Climeworks plants removed 900 tonnes of CO2 that was used to supply greenhouses. But his goal is to eliminate eight billion tonnes from the atmosphere, and to do that he needs policymakers to wake up to the potential benefits of carbon capture. “Changes in policy are much easier if we show there are solutions and we’re not 100 years away,” Wurzbacher says.

3. AI isn’t a fix-all cure, but it is a powerful tool for energy efficiency

“AI can show us creativity but it also has the ability to show us new knowledge,” she says. By using AI to analyse energy use in Google’s data centres, the firm was able to save 30 per cent on energy by switching to an AI system that optimised the cooling system in real-time. And there’s potentially no limit to the gains that these kinds of systems can squeeze out, Witherspoon says. “Rules and heuristics don’t get better – AI does.”

4. Smarter energy forecasts could cut down on the amount of energy used

“Today’s energy system is broken, it has failed to innovate at the same rate as other industries and as a result it is in a race to zero profits,” says Maria McKavanagh, COO at Verv, a company that builds intelligent home hubs that track a home’s energy usage. But by accurately predicting the amount of energy a home will use, she says it could allow people to trade energy with their neighbours.

“We can forecast more accurately than anyone else what the energy consumption of that house is going to be in the next five minutes, hours, or even few months,” McKavanagh says. Verv’s monitoring system samples energy usage millions of times every second and then uses that data to predict future energy usage.

And if energy providers got their hands on this data, they could use it to target energy supply to the right areas at the right times, cutting down on wasted energy product. “If the national grid could forecast with extreme accuracy the energy requirements of every home, we would be able to service that demand,” she says.

5. Energy users might be the people that end up driving change

“Consumers are actually far more forward-thinking than government can sometimes be,” says Juliet Davenport, CEO of renewable energy firm Good Energy. “We’re going to have to make it easier if we’re going to get massive uptake of renewables.”

This means making it easier for people to switch to renewable providers and giving people more options – such as letting them buy excess renewable energy from neighbours over a peer-to-peer marketplace. And at the heart of this all is making products that people want to use, Davenport says. “We have to put ourselves in people’s shoes when we’re designing for people, whether that’s a potato peeler or an energy app.”

Deptford power station – then the world’s largest energy facility – first rumbled into action on the south bank of the River Thames in 1891. Since then, the logistics of energy distribution have changed fairly little, says Stephen Fitzpatrick, CEO of the energy firm OVO energy.

“You build a large power station, you have a very long wire and you put customers at the end of is,” Fitzpatrick says, and the only way of meeting demand is raising the output of those vast power stations. But it’s time for that to change. Fitzpatrick says we should be connecting our energy supplies to the internet, so we can better predict and manage demand, flipping the previous way of distributing energy on its head. “We need to control the demand to meet the supply,” he says.

It’s all very well having connected smart devices that monitor our energy usage, let us set alarms through voice control and adjust the thermostat, but is this technology really as futuristic as it seems? Designer and author Alexandra Deschamps-Sonsino isn’t so sure.

“The home is not a system,” Deschamps-Sonsino says – and we should be wary about devices that reduce our living spaces to slickly-oiled, impersonal machines. Why? Well, the impact of smart devices might stretch far beyond our homes and impact how we use public spaces. “Space dictates what people will and won’t do, how much time they’ll spend in places and how they’ll use the rest of the city as well,” she says.

About two-thirds of all of the energy that’s produced in the world ends up being wasted, says Martin Anderlind, chief business development officer at battery firm Northvolt. The problem? There aren’t enough storage options to keep that energy around until its needed.

“We need to be able to store energy in time, not just be able to move it around geographically,” Anderlind says. And this means investing big in battery production. In 2021, Northvolt is planning on opening a 370 megawatt factory in Vasteras, Sweden, that should be able to produce 200 batteries a month.