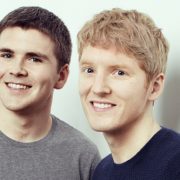 At 27, John Collison is the world’s youngest self-made billionaire. It’s rumoured to be lonely at the top but luckily Collison has his 29-year-old brother, Patrick – who also counts his wealth in ten digits – to keep him company.

The two brothers from a small village in rural Ireland founded Stripe, a company which runs the software behind more than 100,000 businesses. It handles online payments as well as providing a host of other services that help make it simple for firms to run their websites.

Many people may not have heard of Stripe but it counts Tesla’s Elon Musk and PayPal founder Peter Thiel as investors. A funding round last year valued Stripe at over $9bn ($7bn), meaning the Collison brothers each have a stake worth at least $1.1bn, according to Forbes magazine.

Despite this huge success, a recent interview with the BBC suggests John and Patrick remain down to earth.

Asked about experiencing vast wealth at such a young age, John said: “People now ask this a lot and I feel like they always want some really interesting answer – and I have nothing for them.”

“People ask ‘how has your life changed?’, and they want me to have taken up some elaborate new hobby, like Faberge egg collecting or yacht racing.”

Wealth is not new to the precocious pair. They both made their first million before they even went to university, thanks to another start-up which helped companies make the most out of eBay.

John went to Harvard and Patrick attended the equally prestigious Massachusetts Institute for Technology (MIT) but both dropped out in 2011, to focus on using their coding skills to build Stripe.

“You might wonder what is hard about starting an [online] business,” John told the BBC.

“Creating a product that people actually want to buy, and getting them to hear about it, all that we could handle. But getting money from people over the internet was extremely difficult.

”I remember saying to Patrick ‘how hard can it be? Maybe we should give it a try.”

There are numerous companies trying to help other firms process online payments but Stripe has managed to grow rapidly, priding itself on a simple business model and simple code.

In the UK it charges 1.4 per cent of the value of each transaction plus 20p, and firms can be up and running in a couple of minutes because Stripe “eliminates needless complexity and extraneous details”, according to its website.

Surpassing the billion-dollar mark doesn’t seem to have slowed the brothers’ ambitions. They point out that 5 per cent of consumer spending around the world is currently online.