A Michael Jordan jersey from one of the most well-known seasons of his NBA career sold for a record £8.8m on Thursday in a New York auction.

According to Sotheby’s, which coordinated the sale, the amount exceeded original estimates and set a new auction record for a piece of game-worn sports memorabilia.

In Game 1 of the 1998 NBA Finals, which marked the conclusion of the legendary season known as “The Last Dance” and featured in the same-titled 2020 ESPN and Netflix documentary series, Jordan donned the Chicago Bulls uniform. Jordan donned the uniform on June 3, 1998, during a match against the Utah Jazz, scoring 33 points in 45 minutes as the Bulls lost.

Despite significant internal strife that had negatively impacted their season, the Bulls went on to win the championship, and Jordan earned his sixth NBA championship ring.

The 1997–1998 season was “perhaps one of the most popular among Jordan supporters, as Michael was approaching the peak of his talents while concurrently pursuing what he felt would be his last opportunity at an NBA Championship with the Chicago Bulls,” according to Wachter before the sale.

According to the auction house, the pre-sale estimate of £2.7 million to £4.3 million was the highest ever for a Michael Jordan jersey or any other item of Jordan memorabilia.

With the £8.7 million sale price realised on Thursday, it surpassed the £2.6 million bid for a Kobe Bryant jersey last year to become the most expensive basketball jersey ever to sell at auction. According to Sotheby’s, the item also shattered the record for game-worn sports memorabilia held by Diego Maradona’s shirt from Argentina’s 1986 World Cup quarterfinal match against England. Earlier this year, the blue soccer shirt went for £7.8 million to an unidentified buyer.

Jordan wore Nike Air Ships sneakers, which fetched £1 million at auction in October 2021. On November 1, 1984, the basketball superstar wore the red and white sneakers during his fifth NBA game while playing for the Chicago Bulls.

A prominent boxing management company announced this week that it has ceased operations. MTK Global will no longer be trading in the business space.

Founded in 2012, the MTK website has already been shut down.

Many world class fighters have been urged to distance themselves from the brand, as it has been linked to dark elements, and consequently targeted by international authorities.

In 2021, Tyson Fury thanked MTK Global for helping to organise the biggest fight in British boxing history with then world champion Anthony Joshua.

Fury has since commented that behind the scenes business at MTK Global had nothing to do with him or his team. He is now focussing on his upcoming world heavyweight fight with Dillian Whyte.

MTK published a press release regarding their decision to cease operations. American lawyer and boxing promoter Bob Arum has completely removed himself from all things MTK.

The company believes there has been “unprecedented levels of unfair scrutiny and criticism” after the United States government enacted worldwide sanctions.

In December 2020 a racketeering summons was served to MTK Global in the United Arab Emirates by United States law firms.

MTK’s management has to file a response with the United States District Court for the Central District of California or face judgement being entered against them by default.

Jamie Benson won the toss and sent the bankers into bat. The left- and right-handed batting combination of Bedabrata Das and Ronak Shah proved a challenge for the lawyers’ opening bowlers Sayantan Dutta and Siddhartha Desai, and the bankers got off to a quick start. Rabindra Jhunjhunwala and Vijay Parthasarathi were brought into the attack and Parthasarathi had Shah caught by the wicket keeper, Laban Das, for 9 runs. Satyam Singhal was next in, but unfortunately for him, he was run out by Jhunjhunwala after facing only one ball. This brought Javeed Siddiqui, the captain of the bankers, to the crease. Siddiqui and Das batted very well and the scoreboard ticked over at a fast rate until Siddiqui top-edged an attempted sweep from the bowling of Sanjay Israni and he was very well caught by Laban Das for 30 runs off only 18 balls. Amit Nayyar hit two sixes before falling LBW to Murtaza Zoomkawala for 21 runs off 10 balls. Bedabrata Das continued to bat well until retiring on 51 runs. The last few overs saw the bankers lose a few more wickets, but they ended up with an imposing 191 runs for 7 wickets off 20 overs.

Vijay Parthasarathi and Rabindra Jhunjhunwala got the lawyers off to a very good start, despite some good bowling from Harshit Talesara and Arjun Mehotra. The lawyers were on track with the required run rate after 5 overs but a change in the bowling brought a big change to the complexion of the match. Nayyar was brought on to bowl and Jhunjhunwala tried to hit him out of the ground, only to be caught at long off by Siddiqui for 11 runs. Parthasarathi continued to bat well but when he was out for 41 runs caught by Nayyar off the bowling of Shubham Mehta the match was as good as over. A combination of very good bowling from Nayyar, Gaurav Sood and Mehta, poor shot selection and good catching saw the lawyers crumble from 50 runs for no wicket to all out for 85 runs in 14 overs. Apart from Parthasarathi and Jhunjhunwala, no lawyer got into double figures.

The match was the initiative of Jamie Benson of Duane Morris. Benson is based in Singapore and is head of Duane Morris’ India practice and United States securities law practice.

Benson who captained the lawyers’ team commented, “Congratulations to the bankers. They played very well. It would have been nice to win, but the main thing was for everyone to have an enjoyable time and to raise money for a very good cause. I am already looking forward to next year’s match.”

There are so many sports available in the world nowadays, but we can categorise them by the numbers of players, the three main categories are individual sport, dual sport and team sport.

What do a number of Chief Executive Officers have in common? They played competitive sports when they were younger.

But according to a series of EY studies, it is even more common for female executives to have played a sport. They surveyed 821 high-level executives and found that a whopping 90% played sports, which increased to 96% when EY included other employment positions.

Below is a few reasons why playing sports can boost your chances at success:

It may not be that playing sports causes someone to become more of a leader; instead, the truth may be that people who are already competitive and have leadership potential are drawn to sports as kids. They and their families are also often more likely to be affluent, since participation on so many teams requires significant cash outlays.

Sports consume time, energy and resources that many families cannot spare. People who are well-off are more likely to play sports, as well as become CEOs. If you can afford fencing lessons, your child’s odds of becoming a CEO are already quite good.

Sports keep you physically and mentally healthy, teach you important relationship skills and forge determination. These benefits often spill over into the business world.

The NCAA has a robust career centre. Wall Street’s “Lacrosse Mafia” recruits All-American players at staggering rates. You can even scroll through the 42 best lacrosse players on Wall Street.

Northwestern sociologist Lauren Rivera notes that hiring rates increase the most among candidates who played “sports that have a strong presence at Ivy League schools as well as pay-to-play club sports, such as lacrosse, field hockey, tennis, squash and crew.” 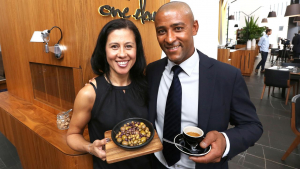