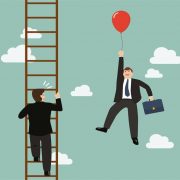 The list, published by the Social Mobility Foundation, revealed that three-quarters of the employers it surveyed considered social diversity a priority. Last year it was led by accounting company Grant Thornton, which this year was ranked second.

The Social Mobility Employer Index ranks UK employers on actions they are taking to make roles open to candidates from all backgrounds, after previous research has shown that people from more affluent backgrounds tend to take a disproportionate number of the best jobs.

The Foundation discovered that around three-quarters (74%) of respondents feel clients care about the socio-economic diversity of their workforce, with similar proportions saying the same of race (77%) and gender (86%).

More than half ask new employees whether or not their parents went to university or the type of school they attended. Thirty percent ask whether or not candidates were eligible for free school meals.

Its research also showed that employers’ focus on elite Oxbridge and Russell Group universities to source talent is waning – the percentage of visits made to Russell Group institutions this year was 56%, compared to 70% last year. Oxford and Cambridge are still visited more than 75 universities combined, however.

The top 10 employers ranked in the index (below) was dominated by professional services and law firms:

More than four in 10 employers now analyse their recruitment processes to see where those from lower socio-economic groups may be falling through the gaps, said the Social Mobility Foundation.

“Blind” CVs are in common use – one in four now remove the candidate’s name from the application or screening stage, while one in five remove the name of their university to avoid bias creeping into shortlisting decisions.

However, despite improvements, the Foundation discovered there were still obstacles to overcome: five in 10 hires in government departments and agencies are from Russell Group universities, and this rose to eight in 10 in law firms. Some law firms hired more than 90% of staff from this group of universities, even where only half of their applicants had studied there.

Around one in eight (16%) employees who considered themselves working class felt they needed to hide their class background in the workplace, the Index found.

David Johnston, the Social Mobility Foundation’s chief executive, said: “We can really see organisations taking a whole host of actions to try and ensure that they have a diverse workforce in terms of socio-economic background as well as in terms of gender and race; they in turn are benefiting from accessing a much wider talent pool than they have traditionally recruited from.”

Alan Milburn, former chair of the Social Mobility Commission, said that the results reflected a “mood for change” in the nation. “[Employers] are making these changes both because they see the social need to do so and because they recognise the business benefit that greater diversity can bring.”

The Social Mobility Employer Index is a voluntary survey that assesses employers across seven areas, including the work they do with young people, their recruitment and selection processes and how people from lower income backgrounds progress within their organisations.

More than 100 employers from 18 sectors, collectively employing over one million people, entered this year.