You are here: Home / News / Networking

I’ve always been a natural extrovert in school and in business. I find it easy to socialise with others and connect with them personally and professionally. When I first embarked on my entrepreneurial journey and left the practice of law, I used to attend as many local networking events as possible. I deemed it important to get out there and connect with other business professionals to build both my brand and network for prospective clients, speaking engagements, and other business opportunities.

I realise that networking is not easy or simple for everyone. There are some who fear being in large crowds of people they do not know at networking events and being forced to strike up a conversation with someone they have little synergy with. Whether you are an introvert or an extrovert, you can build solid networking skills through these 3 simple steps:

Attend as Many Networking Events as Possible

First, find out where the local networking events are in your community. A great place to start is your local chamber of commerce and other leadership organisations that are industry-specific. Many groups will offer the first event free to all guests. Some events may be as high £180 for a lunch. Either way, if you meet your next business contact or potential boss, suddenly that fee becomes pennies and the reward outweighs the risk. But don’t forget to dress professional to the networking event. Treat it like a series of mini interviews.

Every person you meet is an opportunity. A key step to networking is having your own professional image and brand. Don’t make the mistake of showing up to a networking event without a stack of professional business cards.

Make sure the business card has your name, professional title (i.e. Managing Director) or industry (i.e. Finance), phone number, email (keep it professional), and Linkedin URL. Before you put your Linkedin URL on your new personal business card, ensure that you have a customised URL.

When you go to networking events, take a business card from each person you meet and give them your business card. Easy and done, right? Not so fast.

Following-up is the most important part of networking. Always follow-up with each person you meet. Get on their contact list. Tell them you hope to see them at the next event (which may open the door to them inviting you to an event you didn’t know about!). Invite them to have lunch or coffee the next week. Being consistent and committed is key.

Connect on Linkedin & Beyond

If you are going to attend networking events and build connections on Linkedin with attendees from the events (which of course I highly recommend), make sure your Linkedin profile is fully optimised with a powerful headline, compelling summary, and details of your experience. It’s important that the image you put out at the networking events matches your digital footprint — i.e. your personal brand aligns. You never know where this connection may lead.

Develop a rapport with other professionals and connect on a greater level through Linkedin. Share and comment on each other’s content. Engage with one another beyond just being a connection. Join groups they are members of and possibly connect with their connections. 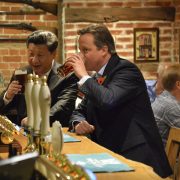 It is being organised by Talbots Law Firm and will be running at The Great Western, Sun Street, from 5.30pm to 7.30pm for business professionals.

Those who sign up by 12 noon on Friday, February 8, get a free drink.

If you would like to attend this initiative, please email [email protected]. 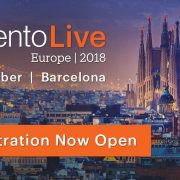 MagentoLive Europe promises to be one of the largest gatherings of eCommerce innovators in Europe, and we’d like to you be there!

Just a few short months after the close of Adobe’s acquisition of Magento Commerce, Adobe and Magento will reveal jointly how the two companies plan to empower businesses to realize the full potential of experience-driven commerce. Join Adobe CEO Shantanu Narayen and Mark Lavelle, Senior Vice President of Commerce, to learn:

What’s more, we’re offering a special €195 ticket price to people who register via this InMail, representing a €500 discount off a Standard Rate ticket. Simply enter promo code ADOBEMER195 during registration to receive your discount.

If you would like to secure your place at MagentoLive Europe, please click the following link: https://live-eu.magento.com/registration 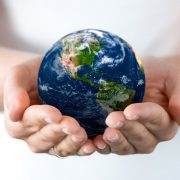 What do international firms and law firm networks have in common? Most would agree the main similarity is their cross-border appeal. The success of both relies in great part on international networks of firms which become a hook for clients searching for multi-jurisdictional capability.

For many networks, the average number of partner firms involved in a deal is still two, but a look at the key deals and projects involving major input across the piece prove that this is not a failure of the system.

“We anticipate that more jurisdictions will be involved in future deals,” Meritas president and CEO Tanna Moore says. “One of our member firms is working on a deal involving 20 of our member firms. Increasingly, businesses must not only be able to perform locally, but also on a global scale. For this to be feasible, they will require legal advice from other jurisdictions.”

Interlaw chair Michael Siebold says that any change in this number will be entirely client-led, depending on the requirements of each deal or project.

“In some instances there could be a dozen jurisdictions involved in a piece of work, or it could be specific to just one location,” he says. “In our experience it averages out at around two to three jurisdictions, but that’s almost immaterial. What matters is that elite independent networks can flex to the needs of the client with the reassuring depth of expertise wherever they need legal advice.”

Referral systems, and referral tracking, has become the norm for both international firms and independent law firm networks seeking to improve the relationship between lawyers from different jurisdictions.

“Tracking referrals is just one piece of the ­puzzle – we want a clear understanding of how clients’ needs are evolving and how we can deliver a seamless service across continents,” Siebold says. “A robust process for tracking referrals has always been in place, but we are now monitoring and analysing more data to build a detailed picture of how work flows around the network. We have invested in an online digital directory with the capacity to hold more than 10 million individual data records, along with a bespoke client management and feedback system .”

“Every firm’s performance and feedback is reflected in a Satisfaction Index score.” ~ Tanna Moore

Moore adds: “We measure our success with Meritas’ referral reporting program, which has been a core part of our network since its inception. We track all referrals, get peer review feedback from referring firms and clients, and every firm’s performance and feedback is reflected in a Satisfaction Index score. Each firm’s score is available on our website.”

Deal origination is also changing for networks, with more referrals coming directly from in-house rather than a partner firm.

“Tracking repeat business within the network is done by staying in touch with the clients and the firms they work with.” ~ Carl Anduri

“Our member firms provide aggregated referral information,” Lex Mundi president Carl Anduri says. “Tracking repeat business within the network is done by staying in touch with the clients and the firms they work with. More times than not the clients will continue to work with our firms and have new instructions.”

For others, clients are slowly gaining ground.

“Historically, deals originated from the clients of our network firms but this is changing,” Siebold explains. “General counsel are looking for quality-assured local expertise in every jurisdiction in which they operate and are starting to see through the ‘emperor’s new clothes’ approach from global law firms who take little more than a logo to some parts of the world. Whereas, the elite networks offer consistent quality throughout the world.”

That is not the rule for all.

“Most new deal work originates from member firms,” Harry Trueheart of TerraLex says. ­“TerraLex teams work together to identify opportunities and make collaborative responses to requests for proposals (RFPs). This will probably remain the case for some time considering the close relationships our members have with their clients, but TerraLex has an ever-growing community of corporate counsel we work with directly.”

“Most deals at Meritas originate from our member firms and we don’t expect this to change,” she says. “Our firms are looking for a safe place to refer business, and we ensure this with our network’s culture, professionalism and tight quality controls.”

To see these referrals in action The Lawyer has tracked some of the biggest deals from the most prominent networks from point of origination to closing date.

The turnaround was quick, with firms completing the deal in two weeks with individual agreements with the final client. This was not the first time that Hera Capital Partners and DSG Consumer Partners used an Interlaw firm – they had a previous relationship helping them with their fund formation and investments.

TerraLex firm Eugene F Collins acted for long-time client Ross Meadow Holdings on its acquisition of the entire issued capital of RIC Publications Pty Ltd, an Australian-based education publishing business. Their instruction on this matter was thanks to the firms’ involvement in the TerraLex network.

The firm called on Lander & Rogers in Australia, Duncan Cotterill in New Zealand and Fairbridges Wertheim Becker in South Africa to help lead on the transaction.

The deal, which took six months to negotiate and was agreed in early February 2016, involved sales agreements in Australia and Ireland. The acquisition was also debt-financed by both senior and mezzanine debt.

Complexity arose in co-ordinating the legal firms and their time zones; the purchaser entity being controlled by an existing shareholder in the target; and the deliberately ‘light’ legal representation for the remaining shareholders who were selling to the purchaser, requiring Lander & Rogers (as purchaser’s lawyers) to design the seller’s data room and then extract the disclosure from the sellers to a level satisfactory to permit due diligence.

Ireland’s McEvoy Partners and Clifford Chance acted for the other party.

The matter required complex advice due to the transaction structure and multi-jurisdictional nature of the operations. Each jurisdiction required documents including specific provisions. The team addressed the transfer of the assets and real estate, employment and various merger laws.

The first phase was successfully closed in 2016 and included all IPS operations worldwide other than in the Middle East and Africa.

“I think going more and more online, reaching out to internet and social media offerings is probably the way to go in terms of development.” ~ Julia Charlton 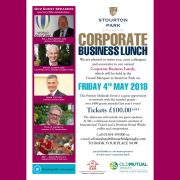 Stourbridge Rugby is pleased to invite you, your colleagues and associates to our annual Corporate Business Lunch, which will be held in the Grand Marquee at Stourton Park on Friday 4th May 2018.

This Premier Midlands Event is a great opportunity to network with like-minded people – over 1,400 guests attended last year’s event!