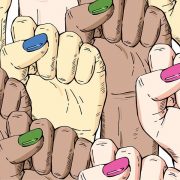 International law firm Hogan Lovells is pleased to announce that for the eleventh year in a row we have received the highest possible score on the Human Rights Campaign Foundation’s annual scorecard assessing workplaces on their efforts towards improving equality for lesbian, gay, bisexual, transgender, queer personnel and other gender and sexual orientation minorities (LGBT+).

HRC’s 2020 Corporate Equality Index assesses U.S. companies and law firms on workplace policies and other criteria including non-discrimination policies, employment benefits, and demonstrated competency and accountability to diversity and inclusion. Hogan Lovells was among the 686 entities that received the top score of 100 percent.

Hogan Lovells has consistently been a staunch supporter of not only LGBT+ rights and equality, but of diversity and inclusion for all. In the last year Hogan Lovells has been named a top 20 employer in the UK’s Stonewall Workplace Equality Index, received the highest level of Mansfield Rule 2.0 Certification, and was named “The Most Inclusive Firm for Minority Lawyers” by Chambers. Our Pride+ Network, a global program of existing internal LGBT+ networks aimed at promoting inclusion across our global offices, has grown since its launch in 2017 to nearly 1800 members.

“HRC’s Corporate Equality Index is the industry standard by which leading U.S. businesses benchmark themselves with respect to LGBT+ inclusion,” said Bendita Cynthia Malakia, Hogan Lovells’ Senior Inclusion Manager and Secretary of the Board for the National LGBT Bar Association. “We are proud that we are developing innovative processes and programs aimed at improving the firm’s diversity and culture, including for our LGBT+ people, and that we have been recognized for doing so. We look forward to continuing to move the needle in the years to come.”