You are here: Home / News / Capitalism 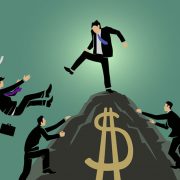 The state of capitalism is in desperate need of reform and modernisation, according to some of the UK’s top business leaders, who claim that the system has been hurt by management greed, corporate tax dodging and investor short-termism.

Speaking on a panel for the Financial Times, former minister Baroness Shriti Vadera, who is now chairwoman of Santander UK, said that “the underlying promise of western capitalist economies — that a rising tide lifts all boats — has been broken”. She said that a “better model” is needed.

Others echoed her remarks.

Robert Swannell, the former chairman of retailer Marks and Spencer, said that capitalism had “lost its way” and that companies and their investors had become much too focused on short termism, according to the FT.

And Carolyn Fairbairn, director-general of the Confederation of British Industry, said that capitalism had taken a number of “wrong turnings”.

“The financial crash, a fixation on shareholder value at the expense of purpose, and the toxic issues of […] payment of tax and executive pay stand in the way of redemption,” she said, according to the FT.

The chairmen of Barclays and Lloyds and the former chairman of HSBC also levelled criticism at the emergence of short-termism. Anne Richards, chief executive of asset management company M&G, said: “In the current era, best described as ‘the age of anxiety’, we will see capitalism rejected unless it finds a way of fundamentally addressing this anxiety.”

Last week the former Greek finance minister, Yanis Varoufakis, claimed capitalism is coming to an end because it is making itself obsolete.

Speaking to an audience at University College London, he said that artificial intelligence would spell the end of capitalism in its current form.

“Capitalism is going to undermine capitalism, because they are producing all these technologies that will make corporations and the private means of production obsolete,” he said, according to the FT.