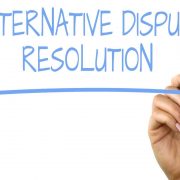 A first-of-its-kind symposium in Edmonton will celebrate the success of Alternative Dispute Resolution in Alberta. The method of conflict resolution is widely used across the province, saving Albertans time, money and stress while alleviating pressure on the province’s justice system.

The gathering will take place over two days at Lister Centre at the University of Alberta.

In addition to celebrating the past two decades of successful conflict resolution through mediation, the meeting will provide a chance for all members of the Alternative Dispute Resolution community to discuss how to continue an upward trajectory of success.

This is the first time members of both the non-government Alberta resolution community will be brought together with the Government of Alberta’s Dispute Resolution Network since the province launched the conflict resolution method more than 20 years ago.

Gilbert Van Ness is the co-chair of the symposium and he spoke on the Alberta Morning News about how ADR got started in the province.

“With programs to use mediation in small claims court, and then it expanded on the justice side of things,” Van Ness said, “to be used quite a bit in the area of family law to deal with divorces, child custody issues, things like that.”

“You’re putting the decision-making power in the hands of a third party, whether it’s a judge or a board,” Van Ness said.

“The strong power of alternative dispute resolution is keeping the decision-making power in the hands of the people whose lives it affects.”

Members of the ADR community have backgrounds in a wide range of fields and are educated through programs and institutions such as the ADR Institute of Alberta in mediation. Van Ness stressed the importance of this diversity in successful mediation.

“The practitioners, the people who do it, come from all different walks of life,” he said. “And so they bring all different kinds of backgrounds to this approach of problem-solving and conflict-solving. And that makes for much more dynamic potentials and solutions.”

The symposium on May 15 and 16 aims to set the stage for a future in which Albertans have the option to turn to mediation instead of spending thousands of dollars and hours of time in the justice system.

“One of our main themes is to make Alternative Dispute Resolution the first choice for the way you want to resolve conflict,” Van Ness said.

Keynote speakers include Court of Queen’s Bench Justice and ADR advocate the Hon. Madam Justice Joanne Goss, and Nancy Mannix, chair and patron of the Palix Foundation and the Alberta Family Wellness Initiative.